Ultrasonics is the science of sound waves above the limits of human audibility. The frequency of a sound wave determines its tone or pitch. Low frequencies produce low or bass tones. High frequencies produce high or treble tones. Ultrasound is a sound with a pitch so high that it can not be heard by the human ear. Frequencies above 18 Kilohertz are usually considered to be ultrasonic.

The frequencies used for ultrasonic cleaning range from 20,000 cycles per second or kilohertz (kHz) to over 100,000 kHz. The most commonly used frequencies for industrial cleaning are those between 20 kHz and 50kHz. Frequencies above 50kHz are more commonly used for high precision cleaning, removal of small particles and delicate parts.

The Nature of Sound Waves

The source of the sound in the model is at the left. The compression generated by the sound source as it moves propagates down the length of the spring as each adjacent coil of the spring pushes against its neighbor. It is important to note that, although the wave travels from one end of the spring to the other, the individual coils remain in their same relative positions, being displaced first one way and then the other as the sound wave passes. As a result, each coil is first part of a compression as it is pushed toward the next coil and then part of a rarefaction as it recedes from the adjacent coil. 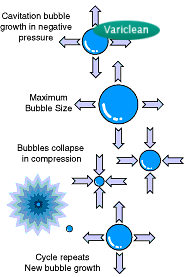 In elastic media such as air and most solids, there is a continuous transition as a sound wave is transmitted.  In non-elastic media such as water and most liquids, there is continuous transition as long as the amplitude or "loudness" of the sound is relatively low.
As amplitude is increased, however, the magnitude of the negative pressure in the areas of rarefaction eventually becomes sufficient to cause the liquid to fracture because of the negative pressure, causing a phenomenon known as cavitation. Cavitation "bubbles" are created at sites of rarefaction as the liquid fractures or tears because of the negative pressure of the sound wave in the liquid.

VARICLEAN benelux bv is specialist in ultrasonic cleaning for industrial and professional applications. On base of your cleaning requirement we would be pleased to provide you the right advise and an adequate solution.

Are you questioning whether ultrasonic cleaning technology will be the solution?

We will inform you with pleasure